Campaigning for better public toilets for all

The BTA is a member of

Our mission is to represent the interest and aspirations of 'away from home' toilet providers, suppliers and users of all types and to act as the catalyst for change inthe pursuit of standards of excellence in all areas of public toilet provision and management.

As announced at the 2011 BTA AGM, Mike Bone will be retiring from the position of Director of BTA at the end of the current financial year, 31st March 2012 and Raymond Martin, a long standing Management Committee Member of BTA, will be his successor as BTA Director. Mike was finding it increasingly difficult to maximise the potential of BTA and Loo of The Year Awards (of which he is Managing Director) with decreasing budgets and minimal staffing. In future Mike will therefore focus his energies towards developing Loo of The Year Awards.

The invitation is to the vernissage (exhibition event) of 'Femmes et WC' next 5 April for your information.

It is an interdisciplinary project - research and art - that has been coordinated by Olivia Munoz-Rojas in collaboration with Alicia Flores.

Loos For Do’s, Hampshire’s luxury toilet provider have recently been awarded the No.1 accolade as “National Mobile Toilet Supplier of the Year 2012” by Loo of the Year Awards, beating over 1400 competitors.

Loos For Do’s have been appointed suppliers for the prestigious Farnborough International Airshow 2012.  Following a competitive tender, Loos For Do’s were awarded the contract for the event which attracts more than 250,000 visitors from across the globe.

Bristol City Council is holding a bidders day on 2 March 2012. This is for you to inform us of your views on our toilet facilities. Anyone interested in bidding/offering opinions and potentially tendering or just offering us feed back on what you would like to see in our Public Toilet Contract, please contact us for an invitation by email to trudy.feeney@bristo&#108a;.gov.uk or kelly.longdon@bristol.gov.uk 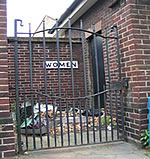 On 2nd February 1852 the first public toilets were opened in Fleet Street central London. These ‘Public Waiting Rooms’ were advertised in The Times and on handbills distributed around the City.

One hundred and sixty years later over 40% of the UK’s public toilets have been closed and more will follow.

Hudson’s Heritage and Tourism For All present OpenBritain

With the Olympics and Paralympics only months away, the UK is gearing up to welcome the world’s finest athletes along with thousands of visitors from across the globe. Hudson’s Heritage has been working alongside Tourism for All to create the OpenBritain phone app and new website – to be launched in March, and to encourage the hospitality industry to take the
business of being welcoming to all seriously by providing a genuine marketing outlet.

The worst baby changing facilities for Mums in Surrey have been rated as “appalling”, according to a survey carried out by Surrey Cleaning Solutions www.Surreycleaningsolutions.co.uk)

A lack of public toilets puts vulnerable people at greater risk of strokes and heart attacks, assembly members have been told.

A cross-party committee also heard a shortage of toilets interfered with police work as officers had to return to their stations to use the toilet.

E-petition for more Ladies Toilets at Entertainment Venues in Wales

An e petition is a way of asking the National Assembly for Wales to consider any issue, problem or proposal that the Assembly has the power to do something about.

A petition has been lodged on the Assembly website and we ask members and site visitors living in Wales to sign it online.

We the undersigned call on the National Assembly to urge the Welsh Government to amend building regulations to require increased provision of ladies toilets at public entertainment venues. Please go to this link if you'd like to sign the petition https://www.assemblywales.org/gethome/e-petitions/

The BTA Innovation Awards recognise innovation in three key areas of ‘away from home’ toilet provision: New Products, New Services and Efficiency Improvements. A panel comprising members of the BTA Management Committee judged each nomination and decided the winners for each award.

There is not much choice: stare blankly at the wall tiles, focus on shoes with face set in a grimace, or maybe whistle.

When men use a public urinal they are cruelly left in full view, with nothing to do as they answer nature's call.
Until now.

That rather shocking stat, was an a-ha moment for Swapnil Chaturvedi, an entrepreneur who has been working on sanitation projects in India’s slums and who was looking for an idea to help him reach many more millions of Indians with clean toilets.

The 2011 Loo of the Year Awards can now be viewed at www.loo.co.uk

For many workers at Starbucks in New York City, the worst part of their jobs may not be the hordes of demanding tourists. Or the irritation of making ever-more-complex skim Frappuccinos and green tea lattes. Or the unflattering elf hats that some baristas have been asked to wear even before Thanksgiving.

It is having to serve as janitors for the city’s de facto public toilets.

10th November 2011 - Currently it's not a legal requirement for councils to provide public toilets and, as austerity measures kick in, more and more local authorities see closing WCs as a way to save money.

Take a look at the BTA Buyer's Guide by following this link.

If you are not a member and you would like to add your products or services to the Buyer's Guide, please visit our Membership page to find out How to Join the BTA.

Unisex toilets will be introduced in schools to create more classroom places.

Playing fields will also no longer be an obligation – potentially killing off team sports such as football, hockey and netball.

Paignton Zoo Environmental Park has won an award – for its toilets.

The Zoo – a registered charity - has been awarded the top grade of 5 stars in the national Loo of the Year Awards.

Public toilets are an essential part of our communities. They are vital to ensure that people retain their dignity, and the confidence to participate in community life. Poor public toilet provision can reduce many people’s ability to remain active and restricts how often, and for how long, they are able to leave their homes.

The deadline for the 2011 BTA Innovation Awards entries is Friday 30th September.

Please enter now! You can do so by sending an email to enquiries@britloos.co.uk

The British Toilet Association Conference was held at The Stratford Hotel, Stratford on Avon on Wednesday 21st September. This was a once a year opportunity for providers of publicly accessible toilets to network with product and service suppliers, as well as user group representatives, to discuss best practice and learn what can and is being done to improve publicly accessible toilets throughout the UK. It also provided an ideal opportunity to recognise the cutting edge of washroom product development and service provision.

Public toilets are not always available where or when you need them, there is often a queue at the ladies, and facilities for disabled people, children and for changing babies are not always adequate.

However, public toilet provision is at the discretion of local authorities, and there is currently no legal requirement for Councils to provide any toilets at all. 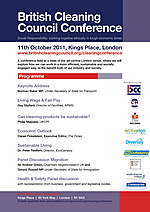 The British Cleaning Council Conference, 'Social Responsibility: working together ethically in tough economic times', will be held on 11th October 2011 at Kings Place, London in less than 4 weeks.

The conference will be held at a state of the art central London venue, where we will explore how we can work in a more efficient, sustainable and socially engaged way, to the benefit both of our industry and society.

You can download the conference flyer in Adobe PDF format here ....

World Toilet Day is a campaign that draws attention to the global sanitation crisis. Inadequate sanitation (2.6bn people lack even a bucket for their waste), contaminated water and poor hygiene kill more people worldwide than malaria and HIV and are responsible for 80% of disease in the developing world. These factors are also a major contributor to the spread of infection in the UK.

Poop Creative, a not-for-profit organisation, is launching a national competition to promote the importance of sanitation and hygiene and to find some great British stand-up comedy along the way. 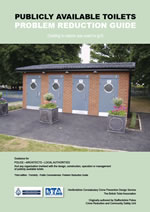 Bound hard copies of this Guide are available to order from this site Price £11.75 including post& packing.

Each year we visit many hundreds of public toilets throughout the UK, provided by both local authorities and other operators. Over the years we have built up a unique fund of practical experience, covering every aspect of toilet provision and operation - and most importantly this knowledge is centred on the views and requirements of the user.

Through Loo of the Year Awards, promoted by BTA, our vision is that every 'away from home' toilet, certainly every Local Authority public toilet, will receive an annual independent assessment and appropriate star rating.

In the meantime, the BTA is ready and able to visit any type of provider - Local Authority or commercial as well as health, education and hospitality establishments, to discuss current standards of provision, future strategy and issues relevant to design, layout, product and service needs, security and maintenance - as well as marketing or revenue generating opportunities.

This service provides impartial, independent advice at a realistic cost which is discounted for BTA members. For more information (add link to BTA Consultation Service section of About BTA tab of BTA Website)

Find out more about the BTA Consultation Service ...