Campaigning for better public toilets for all

News from the BTA

The BTA is a member of 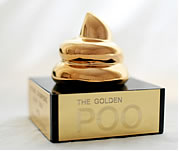 World Toilet Day is a campaign that draws attention to the global sanitation crisis. Inadequate sanitation (2.6bn people lack even a bucket for their waste), contaminated water and poor hygiene kill more people worldwide than malaria and HIV and are responsible for 80% of disease in the developing world. These factors are also a major contributor to the spread of infection in the UK.

Poop Creative, a not-for-profit organisation, is launching a national competition to promote the importance of sanitation and hygiene and to find some great British stand-up comedy along the way.

Entrants can submit a 3 to 5 min video of their stand-up routine or sketch via YouTube from 1st July to 1st September. Ten finalists will then be selected by an expert panel, to perform live at the prestigious Golden Poo Awards on 8th November 2011, in the lead up to World Toilet Day. The audience will vote for the winning act and the winner will receive a fabulous cash prize, a guaranteed place in the Gilded Balloon’s ‘So You Think You’re Funny’ regional finals and considerable attention from some serious players on the comedy circuit.

In 2009 Poop Creative, in association with the London School of Hygiene and Tropical Medicine, presented a successful animation competition around the issues of handwashing and sanitation, which culminated in the Golden Poo Awards 2009 event. Newsweek said of the overall campaign:
“Without a little edge, campaigns to raise awareness of diarrheal disease just get ignored in the West. So maybe it’s OK to offend a few people if that’s the only way to get some much-needed attention for your cause. Really, which is more upsetting, the campaign or the million deaths it’s trying to prevent?”